Bill and Sandy D. are from East Moline and they were walking through the Mississippi Valley Fair and spoke to one of our friendly Trade Show Promoters about some of the services MidAmerica Basement Systems offers. The couple expressed some concerns and gave their information. The homeowners were contacted by an Appointment Center representative, Jessica McDonough, and since they were still experiencing water intrusion in their basement, our team sent Design Specialist, Michael Banks, to inspect the property and provide a free estimate. Michael noticed that along with water intrusion, the foundation walls were also compromised. Michael suggested that Bill and Sandy waterproof the basement and stabilize their bowing foundation walls before the condition worsened.

The project was led by Foreman, Justin Bailey. Justin and the team waterproofed the basement by installing a perimeter drainage system, WaterGuard. WaterGuard is designed to drain rising ground water and wall leaks away from the foundation floor to a nearby sump pump. A SuperSump pump was also installed. A great feature of the SuperSump is it includes a WaterWatch alarm system. This system is activated when water reaches a level above a certain point to alert Bill and Sandy of any issues.

To stabilize the foundation wall, the team installed the PowerBrace system. PowerBrace is designed to support basement walls and allow for potential straightening over time. The homeowners’ simple stroll through a fair resulted in saving their basement from repeated water damage and overall structural integrity loss. Bill and Sandy have a dry and stable basement thanks to the expertise of the MidAmercia Basement Systems Team! 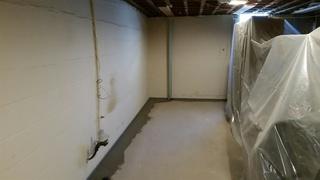 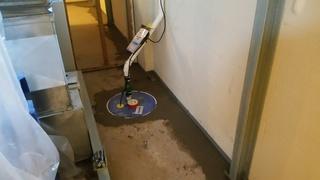