Douglas and Natalie O., a Clombus Junction, IA homeowner, was concerned about water that was coming into his basement through the floor and wall joints, and sometimes just up through the floor. The water intrusions caused the basement to be damp, and the whole house to be a little more humid. Douglas and Natalie called MidAmerica Basement Systems to get the basement waterproofed so they no longer had to worry about the water intrusions.

Douglas and Natalie O. met with design specialist Michael Banks. When Mike met with Natalie and Douglas, he conducted a through investigation of the inside and outside of the home to discover the route of the waterproofing issues. Mike then custom designed a solution that would fit Douglas and Natalie's needs. Mike suggested replacing the old, leaky windows with new waterproof windows. He also recommended full perimeter WaterGuard, a new sump pump and a discharge line.

Foreman Mike Clementz and his team got to work installing the system. They replaced the windows with EverLast Windows that wouldn't allow water to penetrate. The team also installed the patented, sub-floor drainage system, WaterGuard, which is flush to the exterior walls. He also installed a CleanSpace Wall Strip around the perimeter, that empties into the TriplSafe Sump Pump. The TripleSafe Sump Pump has three pumps, including one that runs whenever there's water, one that turns on when there's a lot of water to work with the first pump, and a final pump that turns on when the power goes out. The homeowners also chose to include IceGuard in their system. The IceGuard attachment piece allows water to exit away from the foundation, above ice and snow, in the event that the discharge line freezes.

Doug and Natalie are very happy with their now dry basement! 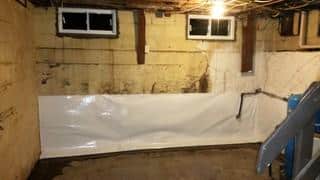