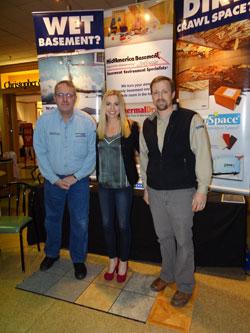 In early March MidAmerica Basement Systems attended the Western Illinois Builders Association Home Show in Galesburg to showcase our entire line of basement waterproofing products and services. The best part of attending these shows is the opportunity to chat with our current and potential customers about their basement problems and to explain how we can help.

But we made a little news ourselves this time. Two of our system design team members, Mark Kurtz and Ed Mueller, had the chance to be photographed with Brandie Malay from HGTV. A familiar TV personality, Brandie Malay hosts HGTV’s “Hidden Potential” and is the real estate expert on the Chicago edition of “Designed to Sell.”

It was during the Saturday session that Ms. Malay made her appearance; it was terrific promotion for the home show and brought out many interested fans. She gave a slide presentation, sharing her expertise on home staging and tips about selling a house -- valuable information for both homeowners and realtors. She also signed autographs.

Malay was a last-minute addition, and show officials engaged in some hurry-up preparations that happily resulted in allowing Malay to be present. She has appeared on the “Today Show” and other network programs.

So the 35th Annual Home Show was a great success -- for everyone involved!