Rebbecca and James A. of Waterloo, IA had water coming in from all over in their basement. Water was entering through hairline cracks in the wall, the areas around the pipes, and at the joint where the wall meet near their existing sump pump. Taking action, they called MidAmerica Basement Systems for a free estimate. After meeting with Bryan Nachazel, a plan was put in place.

When Bryan met with Rebecca and James, he conducted a thorough inspection both inside and outside the home. After determining the problem, and devising a solution based on the homeowners' needs, the new system was installed by Justin Reger and his team.

The basement waterproofing system included full perimeter WaterGuard, and a Trench Drain in particularly wet spots. Additionally, the system included two sump pumps, the TripleSafe Sump Pump, and the SuperSump Sump Pump. The TripleSafe, featuring three pumps, and the SuperSump, featuring one powerful pump, help to keep water out of the basement. The WaterGuard system drains into one of the two pumps. Then, the pumps push the water out through a buried discharge line. Attached to the discharge line is the IceGuard attachment piece, which allows water to still be pumped out above the snow and ice in the event that the discharge line freezes. The new system is keeping the basement dry, and Rebecca and James couldn't be happier. 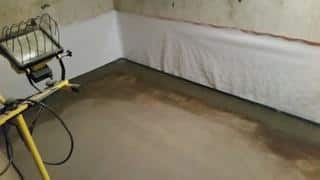