Joyce and Terry D., Vinton, IA homeowners, called MidAmerica Basement Systems because they had water in their basement. After tearing off the wood paneling in the basement, they suspected they also had a mold and rot problem. They knew something had to be done.

Joyce and Terry met with design specialist Mac McDaniel. Upon arrival, Mac talked with Joyce and Terry about their problem, and what they wanted to accomplish with their basement project. Mac then executed an investigation of the inside and outside of the home. Following the investigation, he proposed a unique, custom solution for Joyce and Terry's wet basement issue.

Foreman Justin Reger installed this new system, including CleanSpace Wall and BrightWall. CleanSpace Wall is a thick corded material that protects the interior from water seepage. Water that may come in from the wall is drained into the WaterGuard System. The other half of the basement was finished with BrightWall, which is a mechanically fastened, inorganic plastic wall product that will never peel, chip or flake. Neither CleanSpace or BrightWall allow for mold growth. Finally, a SaniDry dehumidifier was installed to keep the whole home moisture-free in the muggy summer months.

Now, the basement is bright, white, and dry. Joyce and Terry are very happy! 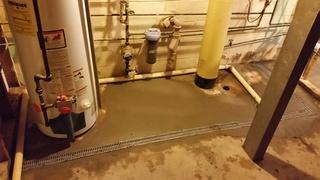