Renovations at the wastewater treatment facility included the construction of a new generator pad east of an existing blower building. The blower building had reportedly experienced settlement since it was constructed in 1984. Consulting engineers determined the blower building had settled down to the north on the order of five inches and the settlement was likely due to poor compaction of fill soils. It was also believed that further consolidation of the soils could occur due to water infiltration, vibrations from the new equipment, and/or additional loading of the soils from the new equipment. Recommendations to stabilize the blower building included the installation of retrofit helical piers spaced at six feet center to center for design working loads of 21 kips each. The blower building was to be stabilized only, and not lifted, to prevent
additional cracking in the foundations and floor slab. Lifting of the structure could also result in separation or damage of the utilities. One of the unique challenges for this project included limited working space (three feet) between the blower building and a storage basin. The closest soil boring to the footprint of the blower building identified loess soil consisting of medium stiff to stiff lean clay and medium dense silt to a depth of
33.5 feet underlain by stiff to very stiff clay to the maximum depth explored of 43 feet.

Both helical piers and push piers were considered for this project. Push piers were ultimately selected due to limited access for installation equipment, push piers being more economical since both systems would terminate at approximately the same depth, the difficulty of installing a helical pier lead section with three or more helix plates in a retrofit application, and the verification of each pier’s ultimate capacity as
determined through the installation process. The stabilization plan included sixteen (16) Model 288 (2.875-inch O.D. by 0.165-inch wall) hydraulically driven push piers spaced at six feet on center with design working loads of 21 kips each. The footing was notched for the placement of the underpinning bracket assemblies by removing small sections of concrete back to the face of the foundation wall. The sixteen piers
were advanced to driving forces of at least 1.83 times the design working loads to an average depth of 40 feet below the bottom of the footing. After the piers were driven individually, hydraulic cylinders were attached to each pier, connected in series, and uniformly loaded to the design working load of 21 kips. Despite tight working conditions and utility obstacles, the building was successfully stabilized and the project was completed on time.

Products Installed: (16) Foundation Supportworks® Model 288 Push Piers, Installed to an Average Depth of 40 Feet Below the Bottom of the Footing, Design Working Loads of 21 Kips 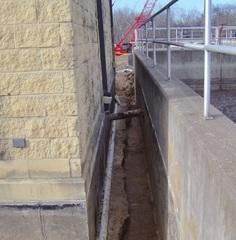 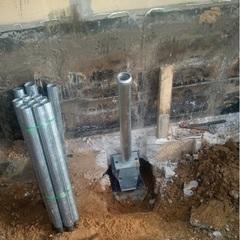 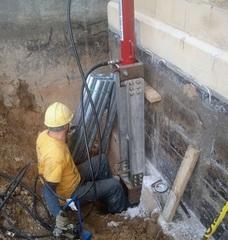 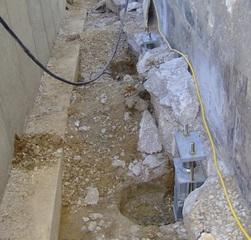