Jason and Jamie J. of Pekin, IL had a damp, unattractive and unfinished basement. However, bad aesthetics weren’t the only reason Jason and Jamie wanted their basement finished. Perhaps most important to the homeowners was maximizing the space they weren’t able to utilize in their basement, due to water damage and frequent flooding problems. Soon, a design specialist from MidAmerica Basement Systems was ready to take on the job, and help Jason and Jamie decide the best route to take.

First, foreman Mike Keck and his team went to install a new Egress Window to add more light to the basement, while creating a space that would function as a viable escape route in the case of emergency. Then, Mike Clementz's team installed patented WaterGuard, which is a sub-floor drainage system that keeps the water out of the basement. With WaterGuard installed, CleanSpace was placed on the wall to keep water away from the interior. A new TripleSafe sump pump was put in to keep water out of the basement. The incredible heat-reflecting and insulating Basement to Beautiful panels were installed, with ZenWall paneling to give the space the finished look. Additionally, the homeowners chose to use Everlast Walls to further beautify the space. The last to be installed was the ThermalDry Carpet and ThermalDry Tile Flooring.

MidAmerica Basement Systems’ expert foremen and laborers preformed the Total Basement Finishing task in a total of 10 working days. The dry, water-free basement is completed and ready to be used for whatever the homeowners can dream about! 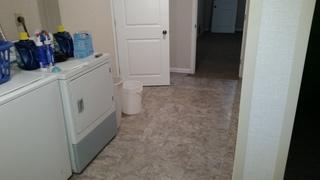