Mark S. from Swegle reached out to the professionals at MidAmerica Basement Systems regarding a two decade old problem he’s been battling in his basement. Mark expressed to the team they have had water coming into the basement for 20 years and he had exhausted all efforts. Mark had tried various ways to fix the problem, he even tried recommendations from other professionals, yet nothing seemed to work.  Mark further explained that water seeps through one particular area only and that there was a drain that some water trickled to but water would eventually back up into a finished bedroom.  The team sent Design Specialist, Joe Sarb, to go to the home and give Mark advice on what permanent solutions would work best for the basement. Excited to finally have the battle against water intrusion over, Mark gave the OK!

Foreman, Justin Bailey, oversaw the project. The team waterproofed the wall with extensive water problems starting with the patented WaterGuard sub-floor drainage system. They also installed a SuperSump pump system. The team had to customize the project to cater to the basement's needs so they installed the SuperSump at the lowest point of the floor and then had to construct a 10' buried 4" PVC Discharge Line along with 50' of buried 1 1/2" PVC inside the home which is connected to the SuperSump pump system to ensure maximum efficiency. To prevent floods from frozen discharge lines the team installed IceGuard. Mark is beyond relieved to finally have a dry basement and that he has finally won the battle! 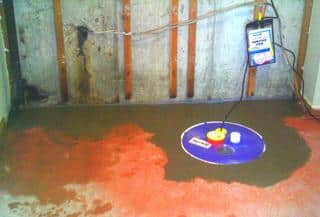 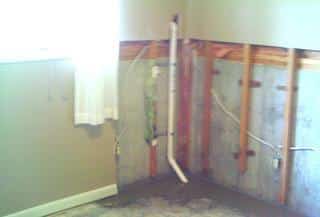