Carl and Donna from Freeport had a sump pump and drain tile system that clogged and simply did not keep water out of their basement. The failure of these systems caused the basement to be damp and smelly. On top of basement water seepage, the owners were also concerned about the numerous cracks in the basement walls so homeowners contacted the professionals at MidAmerica Basement Systems. The team sent Design Specialist, David "Mac" McDaniel to the residence to provide a full, free inspection and estimate to Carl and Donna. Mac sat down with the homeowners and explained what solutions would permanently remedy their wet, unstable basement. The homeowners, excited to have a dry, stable basement again, gave the MidAmerica Basement Systems team the green light!

The project was led by Foreman, Justin Bailey. Justin's team stabilized the walls with Wall Anchors. The team removed the old drain tile system and replaced it with the clog resistant perimeter drainage system, WaterGuard. TripleSafe sump pump replaced the old sump pump which is very exciting as TripleSafe is everything one would want out of a sump including an airtight lid, airtight drain, 3in1 sump pump that includes a battery backup in case of a power outage and more. The team installed BrightWall panels to make the basement brighter and cleaner looking. The ThermalDry wall system was installed to insulate the basement by bouncing heat back into the basement. ThermalDry also blocks water vapor and helps drain wall leaks to the WaterGuard system. To bring natural light into the basement, the team installed EverLast windows. The team has provided Carl and Donna with a wonderfully brighter, dryer, warmer and safer basement! 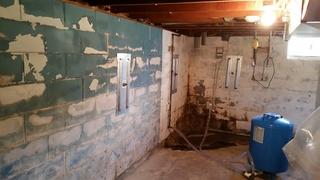