The basement storage room at All Makes Office Furniture building had become worse and worse over the years. The room was always leaking and because of all the moisture that wasn’t properly dealt with, left the whole room full of mold. During large rain falls, streams of water would flow across the floor. The current sump pump would properly work, but could not handle the large amounts of water that would enter the building. MidAmerica Basement Systems were called in to have the room waterproofed, and properly keep the area dry.

Before the waterproofing process could begin, Mold X was sprayed on all affected areas to help clear up the area, leaving it safer for the crew to breathe. Crewmen began digging trenches around the perimeter so WaterGuard could be installed. An issue came along when they were digging trenches, rebar was found in the concrete, making the process tougher. The sump pits for two TripleSafes were dug, and put into place. Due to the large amounts of water entering the building’s foundation, the sump pits were constantly filling up before the whole waterproofing system was installed. Project foremen, Dillon Heard, mentioned that he had to empty the pit multiple times during the installation.

The crewmen continued to work, placing CleanSpace Liner along the foundation walls. CleanSpace acts as a moisture barrier, preventing moisture from entering the area. The additive antimicrobial in the material prevents mold growth, making it safe to install in the room. WaterGuard was than installed in the trenches, helping to collect water from both the moisture seeping in the foundation walls, and from under the foundation floors, directing the water properly to the sump pumps. Two additional TripleSafe sumps were installed, still having the original one working with the system. It was necessary to have a total of three sump pump so the amount of water that was entering the building was handled. If the original sump was the only sump pump in the room, it would become overwhelmed, causing for pump failure and extensive water damage. The once wet, mold growing storage room, is now complete dry and clean with the waterproofing system from MidAmerica Basement Systems. 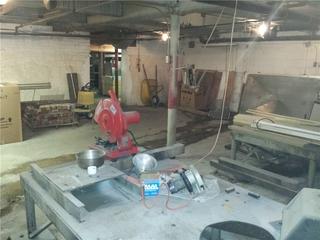 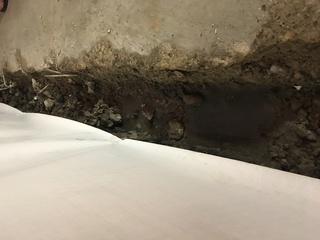 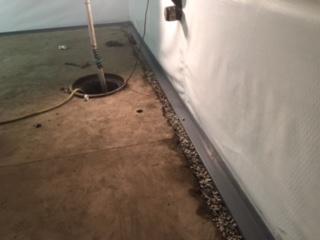