Leaking basements and excessive moisture can lead to mold and structural damage when left untreated. For the Historical LeClaire Hotel in Moline, IL, 30 plus years the basement was left unattended and untreated, leaving the building at great risk! With help from MidAmerica Basement Systems, the longevity of the historic building's life has greatly increased!

The Historic LeClaire Hotel, now known as the LeClaire Apartments, located in downtown Moline, Illinois, was built in 1922. Standing 168 feet tall, the 15-story building was, and still is, the tallest building in the Quad Cities. The luxurious hotel hosted many celebrities and presidents, and had the most elegant ballroom called Top Hat. After closing down in the mid-1980’s, the building sat unoccupied for ten years before being purchased and registered as a National Historic Place on February 4th, 1994. Today, renovations have made the rooms accommodating for apartment living.

The basement area, that once accompanied the mechanical heating and ventilation systems, a service passage to the LeClaire Theater, a small public lobby, three elevators, a barber shop, bathing rooms, public rest rooms, and underground trolley, no longer exist. Areas were boarded up with concrete blocks and wooden doors, which now have crumbled and rotted away due to extensive water and moisture that has leaked over the years. The Historic LeClaire Hotel was beginning to slowly crumble at its own foundation. Some areas of the basement would collect more than five-inches of standing water, damaging what was left of the historical basement.

Alex Fletcher, property manager of the LeClaire Apartments, was in desperate need to preserve the building’s basement and MidAmerica Basement Systems was contacted to help. Design specialist, David McDaniel, had discovered a large concern of iron ocher, which poses large threat to any waterproofing system. Iron ocher is an orange-colored sludge that can cause blockage in piping systems, sump pumps, and discharge lines, leaving a larger mess than before. Once the bacteria is present, it will always be present, leaving the waterproofing system at a constant risk. MidAmerica Basement Systems has a patented drainage system called WaterGuard Iron Ochre System (IOS) that allows for a system to be properly maintained and managed, preventing iron ocher back-ups. Much like the WaterGuard Drainage System, WaterGuard IOS allows for access at any area of the tile to be opened and flushed out. Using a constant 140-degree Fahrenheit water temperature or concentrated peroxide, will treat the iron ocher build-ups, allowing for proper water flow throughout the waterproofing system, keeping the basement dry and healthy.

Along with the WaterGuard IOS, Trench Drains, CleanSpace Liner, and five (5) SuperSumps were installed to maintain the appropriate dry basement. WaterGuard IOS and Trench Drains were installed around the perimeter of the building’s basement to collect and redirect the leaking water to the SuperSumps. Some areas of the older foundation in the basement also received CleanSpace Liner to help redirect seeping wall water to the WaterGuard IOS and Train Drains. CleanSpace Liner also help reduce the moisture from entering the area. Having five (5) SuperSumps installed is necessary to insure the proper function of each sump will not be overworked, and to accommodate for the amount of water that enters the basement area. With proper system maintenance, the basement of the Historical LeClaire Hotel will greatly increase the longevity of the building’s life.

Photo 2 (middle) description: Unattended leaks have left sections of the basement to pool, allowing mold and mildew to grow and damaging the building’s foundation.

Photo 3 (bottom) description: Trench Drains (upper), WaterGuard IOS, CleanSpace Liner, and SuperSumps (lower) are installed around the perimeter of the basement to collect and redirect the water out of the area, helping preserve the historic building.

References on the Historical LeClaire Hotel:

For more photos of the waterproofing process at the Historical LeClaire Hotel, Click Here 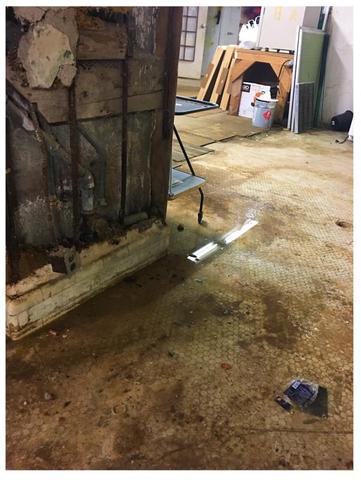 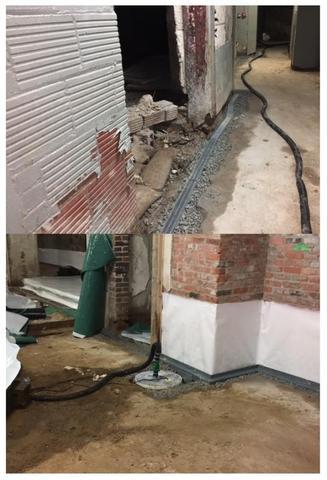