Calvin S. lives in Bloomington and he has water intrusion coming into his basement through the drain and where the walls meet the foundation floor. Calvin decided to give the experts at MidAmerica Basement Systems a call and spoke to Appointment Center Representative, Jessica McDonough. The team sent Design Specialist, Kevin Coakley, to Calvin’s home to inspect the property and provide Calvin an estimate. Calvin also explained that he was concerned about Radon in his home, and Radon tests confirmed that Calvin's home had very high levels of Radon which is not safe. So Kevin suggested that Calvin both waterproof his basement and have a Radon mitigation system installed to reduce the levels of Radon.

The project was led by Forman, Bill Wilcox. The team waterproofed the basement by installing WaterGuard as the perimeter drainage system. WatergUard will drain wall leaks and rising ground water away from the foundation floor and to the sump pump. The team installed SuperSump pump which comes with features such as airtight lid, airtight drain, zoeller cast iron pump, perforated sump liner, clean pump stand and WaterWatch alarm system to alert Calvin of any rising issues. To reduce the high levels of Radon in Calvin’s home the team installed a Radon Mitigation System. Calvin has a dry basement but also has an overall safer home! Calvin called the team to thank them for their excellent service and expressed that he is really happy with the installed systems! 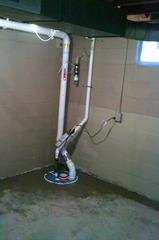 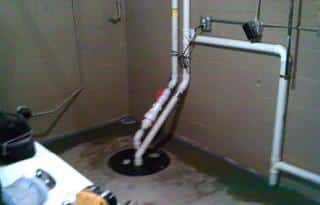